Dimitra Amarantidou (易冬兰) is a Ph.D candidate in the Department of Chinese Philosophy at East China Normal University (Shanghai). Her research focuses on irony and paradox in early Confucian thought. For the last three years, she has been teaching Chinese Philosophy courses at ECNU and has been working both individually and collaboratively on several translation projects, including Guo Qiyong’s 郭齐勇 Contemporary Studies of Chinese Philosophy, 1949-2009 and Yang Guorong’s 杨国荣 Twenty Discourses on Chinese Philosophy as well as the latter’s Zhuangzi’s World of Thought.

You Cannot Say the Same Thing Twice: Change and Irony in the Analects

Scholars East and West have not failed to recognize change as a key notion permeating classical Chinese thought. The Analects, one of the core texts in the  Chinese philosophical tradition and foundational for the development of Confucianism, is a record of Kongzi’s sayings. It evidences the Master’s ironic attempt: to contain changing reality in unequivocal, reiteratable statements. While most ancient commentators and many modern scholars have often read the Analects as a set of straightforward dictums providing fixed moral prescriptions, many others have also often appreciated Kongzi’s irony and explored its vast philosophical implications. In this paper I will argue that, faced with the impossible task of teaching and offering counsel in the midst of change, and primarily concerned with remaining relevant and responding to concrete situations, Kongzi inevitably adopts an ironic tone. However, his irony is more than a mere linguistic trope, a rhetorical device, or an indirect teaching method. It is not the linguistic representation of changing states of affairs, but the presentation and manifestation of changing reality in linguistic terms. In this sense, Kongzi does not merely employ irony, but embodies it. Irony is not an element of his philosophical discourse, but that discourse itself: the only linguistic environment and thinking mode fit to attune with changing circumstances, but also the only remedy and safeguard against trivialization, intellectual arrogance, and dogmatism.

Antonio De Caro (戴嘉羅) is an Italian PhD student at Hong Kong Baptist University (HKBU, 香港浸會大學) within the Department of Religion and Philosophy under the supervision of Prof. Lo Ping-Cheung (羅秉祥). He is mostly interested in the history of Italian Jesuit missionaries in China during the late Qing dynasty as well as the interactions between Chinese and European philosophies. His current doctoral dissertation focuses on Fr. Angelo Zottoli SJ (ChaoDeli 晁德蒞, 1826-1902), an Italian Jesuit missionary who lived in Xujiahui (Shanghai) for more than fifty years, and his cosmogonic writings. 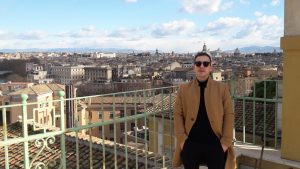 Angelo A. Zottoli S. J. (Chao Deli, 晁德蒞, 1826-1902) spent more than fifty years evangelizing the people in the area of Zi-ka-wei (Xujiahui 徐家匯), in Shanghai. From the very beginning of his journey in China he started to study the theological concept of creation and he wrote in 1849, one year after his arrival in Shanghai, his first theological essay in Latin, the Dissertationes theologicae (Theological dissertations). However, his initial stance on creation was orthodox and he tended to reject, with some exceptions, any alternative narration concerning cosmogony. Yet, the encounter with the Zhouyi 周易and Neo-Confucianism radically changed his perspective on narrating cosmogony and Creation. In fact, in 1869, he produced the Qupi xunmeng 取譬訓 蒙 (Catechism illustrated with examples or Using Parables to Instruct the Ignorant, 1869-1870) where he accommodated Roman Catholic cosmogony adopting a Confucian terminology. In this text the concept of creation out of nothing (ex nihilo) had been rendered as huacheng 化成 (completed transformation). In my essay, I will display how this choice is part of Zottoli’s effort to narrate the concept of creation out of nothing adopting Confucian cosmogonic terms pointing out his struggle to be a mediator and a transmitter of the late Ming dynasty Jesuit ideas. 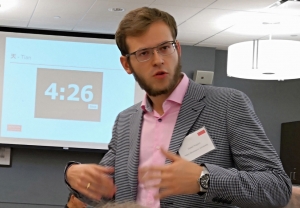 The Marxist view of history seems to be unprecedented in the scale of all human thought. It is widely believed that Asian cultures which adopted Marxism as its state ideology, such as the Chinese one, struggled with understanding its basic categories, by confronting it with their totally remote traditional worldview. This paper challenges both these beliefs. As I shall argue, historical materialism understood as a philosophical standpoint could be traced back to the Chinese ‘middle ages,’ for it was represented by two generally unheralded Chinese thinkers: Liu Zongyuan (柳宗元, 773-819) and Li Gou (李觏, 1009-1059). Both thinkers successfully meet the adopted criteria of historical materialism: (1) belief in the dependence of culture upon the material fundaments of social life; (2) interpretation of history through the prism of structural transformations, and not in relation to human intentions; (3) understanding of social, political and economic relations in terms of antagonism between social classes (groups). Finally, both Liu Zongyuan and Li Gou present an insightful social critique, which is targeted at feudalism and semi-feudal centralized junxian system.