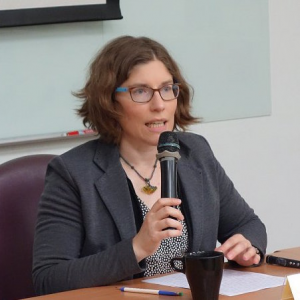 Leigh Jenco is Professor of Political Theory at the London School of Economics and principal investigator for the Humanities in the European Research Area grant project “East Asian Uses of the European Past,” funded by the European Commission. Her research is animated by questions of how knowledge is produced across real and perceived borders, centering on late imperial and modern Chinese thought. Her current project examines Chinese and Dutch colonial discourse on territorial expansion in Taiwan in the seventeenth and eighteenth centuries, but she continues to work on related questions of Chinese identity and self-knowledge in the political thought of the modern era. Her recent publications include “Can the Chinese Nation Be One? Gu Jiegang, Chinese Muslims, and the Reworking of Culturalism” (Modern China, February 2019) and Changing Referents: Learning Across Space and Time in China and the West (Oxford University Press, 2015).

This talk will examine how theories of xing (often translated as “human nature” or “tendency”) in pre-Qin and later imperial Chinese discourse function to justify imperial rule over others perceived as culturally different. Although xing has been shown, in my view persuasively, to form a central part of the discourse of colonial travelers and writers in the late imperial period, my argument here is not empirical or historical, but rather conceptual. I try to show how—in a wide variety of philosophical, literary, and other texts produced by Chinese thinkers throughout time—the idea of a shared human nature acts as a key index of the moral and political worth of perceived cultural others, and as such is deployed as a justification for the transformation of those others to accord with the reigning standards of Confucian civilization.

Professor Haiming Wen received his Ph.D. in comparative philosophy from the University of Hawaii in 2006. He is now a professor at the School of Philosophy, Renmin (People’s) University of China (RUC), The Beijing Center (TBC, since 2007), Yenching Academy (YCA, since 2015). He is the secretary-general, and Director of Research for International Association of Yijing (the Book of Changes) Studies, Associate Editor-in-Chief of the Journal and Press Confucian Academy.

Professor Wen has published the books A New English Translation of the Book of Changes (Commercial Press, 2019); Making One’s Intentions Concrete: Dimensions of Confucian Ethics (in Chinese, RUC Press, 2014); Confucian Pragmatism as the Art of Contextualizing Personal Experience and World (in English: Lexington, 2009); and Chinese Philosophy (in English: Cambridge University Press, 2012; in Chinese: China International Press, 2010). He has also published more than 50 journal articles in both English and Chinese, including more than 10 articles in English peer-reviewed journals like Asian Philosophy, Journal of Chinese Philosophy, Dao: A Journal of Comparative Philosophy, Contemporary Chinese Thought, Culture and Psychology, Frontier of Chinese Philosophy, etc. He has been invited to present more than 50 papers in more than 20 countries all over the world.

In this paper, I argue that there is a philosophy of the Book of Changes (Zhouyi or Yijing) based on intention or intentionality (yi 意) in different dimensions and compare them with Western philosophies, then argue that the intention-based philosophy (yibenlun 意本论) of the Book of Changes played a central role in influencing the changing paradigms of Chinese philosophy in various historical periods. I argue that these intention-based philosophical dimensions of the Book of Changes include the following: 1. The metaphysical sensibility of the Zhouyi means humans are able to be continuous with the heavens (tian), and the sages are people whose intentions are harmonious with the movements of tian. 2. It can be argued that there is a metaphysics of intention (yiben xingshangxue意本形上学) that starts from the creativity of the world and extends to the continuity of intentions and their creative context. 3. The ontological existence of the world is creative-creativity (shengsheng), which means the world and the intentions of all sentient beings are creatively interconnected. 4. The epistemology of intention means that intention is both the starting point of understanding the world, and its quiescence can penetrate to all the movements of the world. 5. Although the Book of Changes is normally considered to be a book that can be used for fortune-telling, its philosophical sensibility of determinism is compatible with the theory of free will. 6. The intention-based philosophy of the Zhouyi means that human intentions are influenced by their environment and all things are together with intentions, therefore the relationship of subject and object should be continuous. 7. The intention-based philosophy of the Zhouyi means that the human mind and intentions are universal in the sense that there is nothing outside our intentions, so things are continuous with every movement of our intentions. 8. The intention-based ethics means that humans behaviors are concretized through their intentions, and the ethical values of one’s behavior can be traced back to the self-reflective understanding of one’s intentional movement. 9. Thus, the intention-based ethics of the Zhouyi is more a version of motivationism than consequentialism. 10. In short, the political philosophy of the Zhouyi means that humans create their lives through concretizing their intentions and being harmonious with the movements of things and events that are changing together with their intentions.

This intention-based philosophy of the Zhouyi played a central role in influencing the changing paradigms of Chinese philosophy in various historical periods. For example, in the Han Dynasty, Liu Xin founded the School of Old Text Classical Learning (guwen jingxue 古文经学), and placed the Zhouyi as the most important among the Five Classics. Ever since then, the Zhouyi played a more and more important role in studies on the Classics for nearly two thousand years. In the Wei-Jin period, philosophers such as Wang Bi played a revolutionary role in reinterpreting the Classics, and started a new historical movement shifting the philosophical paradigm from Han Dynasty theories of yin-yang and wuxing to Daoist philosophical thinking. During the Song and Ming Dynasties, philosophers such as Zhu Xi and Wang Yangming founded their philosophical systems on reinterpreting the Zhouyi, arguing that the real world is either outside our intentions or is continuous with our intentions. In modern times, philosophers such as Xiong Shili and Mou Zongsan continued to reinterpret the Zhouyi in order to build a new philosophical paradigm. Therefore, a new philosophical reinterpretation of the Zhouyi is extremely necessary for opening a new paradigm of Chinese philosophy in the historical era of dialogue between Chinese and Western philosophies.